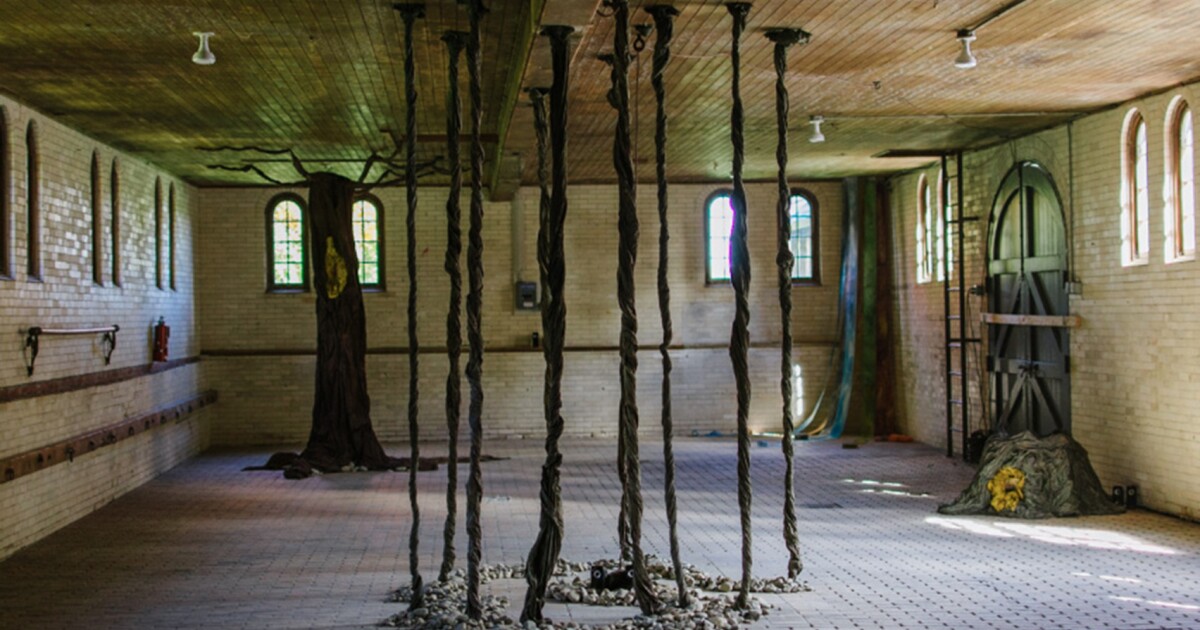 Kaylynn Sullivan TwoTrees lives in Hinesburg. She is 77 years old and has lived a life at the crossroads of identities, cultures and worldviews – she has indigenous, African and European ancestry.

TwoTrees works in multiple mediums including multi-sensory installations with sound, smell and visuals. Although she describes herself as a multimedia artist, she prefers the term “maker”.

“If you live in a room with two things, I’m going to do something else with it, and I think I’ve been doing that since I was about 7,” she said. “I’ve been doing art since the 1970s.”

Vermont was unexpected for Kaylynn Sullivan TwoTrees. She arrived in 2008 but moved back and forth between California, New Mexico and Vermont before settling in Green Mountain State in 2012.

“I am a desert rat. I love the desert and the big sky,” she said. “But I found myself coming back here, because I had started to build deep, deep relationships with the people here. And so it was on one of these trips here that a friend told me taken to a piece of forest here. And in this forest, I was told that I had to come here, and that there was work to be done. And there was work to be done with this piece of earth in particular.

The land in question was a tract of forest at Shelburne Farms. And it inspired Kaylynn’s first major art installation in Vermont, called “earth and local”.

It wasn’t just an exhibition that brought together land and history, but almost a way of stretching the audience both to imagine and to be locked into what a specific landscape looks like given everything they’ve seen or experienced. .

Think of a place that you remember from your childhood. Maybe a schoolyard or a backyard. If you were to think of all the sounds that came together in this space, what would it look like?

“The room had like an old stone wall made out of waxed bee cloth, which had the sound of old Vermont stories, like Green-Mountain-Boy,” Kaylynn said. “Further along, there were these trees standing there like saplings in fabric. It was the sound of some of the findings from the eugenics program. And then further along, there was an old tree stump with the sound of part of the story of the black farmers. And then, at the very bottom, there was a grandmother tree carved out of fabric that told the story of the lake, of Pitawbagw, the Abenaki story of the lake.

Kaylynn says it was all happening at the same time.

“So when you got close to the sculpture that was making that sound, you could hear it very clearly,” she said. “But everything else was a bit of a dissonance on the pitch. But there was a place in the middle of the room, that if you stood there, you could hear them all, like a choir.

For Kaylynn, the purpose of this piece and all the other works stems from wanting to invoke, provoke and evoke.

“It has always been important to me to invoke the ancestors and all life and the universe, in the space that I work or in the work that I do, so that I become a vessel for the work to come. , ” she says. “So this invocation is the first piece of any piece. So invoke the place from which it comes, the source of the creative impulse, which is the source of all life.

Then, she says, it’s essential to evoke a response in the viewer.

“It’s not very interesting for me to create work that can be passively consumed,” Kaylynn said. “More to try to trigger memories or trigger connections, trigger some sort of deep, deep, deep DNA memory, or to evoke an emotional response, a connection, the beginnings of a relationship, the beginnings of remembering a relationship in the spectator or in the participants.

And then comes the provocation.

“I find there’s something about being outside the parameters of things — I see myself as a borderline person,” she said. “I used to think of myself as a person at a crossroads, but I actually think I kind of navigate the frontier and have done that for most of my life. By doing this, there is something that I provoke. I provoke a conversation. I provoke a reflection, a surprise in the spectator – and in myself sometimes.

She says this project started with automatic writing.

“I created this secret language that was just a form, but…it almost looked like you could read it,” she said. “And just playing with time and hanging it on the walls, lots and lots of it everywhere. And then I started painting on it and thinking about how language connects us and separates us.”

Kaylynn said something happens when you learn another language – you learn new ways of looking at things.

“I heard the story of a village in southern India, where they have a ceremony that they have been doing for 4,500 years: they sing these songs that have been transmitted by men, and no linguist was able to relate these songs to any human language,” she said. “And the closest they could find was the language of birds. It made me start thinking more about language. Was there – or when was it the time when we spoke with the animals? When was it the time when we all spoke the same language? which language ? And what was this world, and what was the communication?

“Falling Into Language” premiered at Burlington City Arts in the summer and fall of last year. I visited during this time, and the first thing that surprised me in a dimly lit hallway was the description leading up to the exhibit. Inside was a fragment of a story that Kaylynn borrowed from “She Unnames Them” by Ursula K. Le Guin, which reads:

“Eve longs to return to a primordial sea. And misunderstandings caused by words, no longer stand between her and the rest of creation. So she anonymized all animals, from sea otters to bees, when she was done , she marvels at how much closer they feel than when their names had stood between me and them as a barrier.

Upon entering the exhibition space, I saw the paintings hanging on the wall. My eyes wanted to try to read some of the bits of language I encountered. The space itself was immersed in sound, which Kaylynn described as “lively sung” tracks.

“Maybe language as we understand it now is something that’s decentralization rather than evolution,” Kaylynn said. “In the native culture, there are a lot of vocables, a lot of songs that are meaningless sounds, but that have a meaning. They communicate, but they don’t have a literal meaning.

“How long do we allow ourselves to dream? How much time do we give ourselves to stop explaining and get off the beaten path of the imagination, and dream so that we can dream of a future that is not dystopian? And who has a presence here and now, so that we can live there? “

Another way to find meaning beyond the literal, Kaylynn says, is to dream.

“I’m so grateful for the possibilities Vermont has created in my life, I have a life here that I never imagined, in a million years I would have,” she said. “We live in times that can be considered very chaotic, uncertain and negative. There are so many projections of a dystopian future that seems to fill the airspaces, and so I think I’d like to leave people with the idea to go with the idea of ​​dreaming.

She added: “How long do we allow ourselves to dream? How much time do we give ourselves to stop explaining and get off the beaten track by imagination, dreams, to be able to dream of a future that is not dystopian? And who has a presence here and now, so that we can live there? It’s–it seems possible. And so I cling to that possibility, with a huge sense of gratitude.

Do you have questions, comments or advice? Send us a message or tweet us @vprnet.

This story is part of “Seeing… the Unseen and In-Between in the Vermont Landscape,” a series dedicated to exploring the culture, place, people, and stories that run deep here in the Vermont.