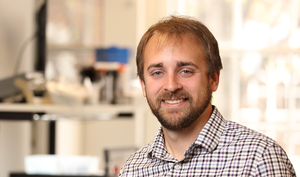 Sustainable objects for the Internet of Things

Even the frugal among us upgrade their cell phones and laptops from time to time. They are relatively easy to replace.

This is not the case with Internet-connected sensors increasingly installed in buildings and other structures. Small monitoring devices located in hard-to-reach places constantly collect and report data, ranging from temperature and humidity levels in office buildings to pressure on bridges.

Sensors are an important part of the larger network researchers call the “internet of things,” comprising the billions of connected products that make our cars, homes, businesses, and cities more efficient. These networks promise huge benefits to society, such as medical sensors that help doctors provide better patient care and environmental sensors that help people save energy.

But a big question keeps the technology from reaching its potential: how do you keep all those little computers running over time?

“Internet of Things devices often monitor infrastructure that is expected to last for decades or even centuries. We don’t replace all of our buildings every five years,” said Brad CampbellAssistant Professor of Computer Science and Electrical and Computer Engineering in the School of Engineering and Applied Science at the University of Virginia.

He won a National Science Foundation CAREER award of $700,000 over five years for his research, “Reusable devices for a greener Internet of Things,” to respond to the question.

The CAREER program, one of NSF’s most prestigious awards for early career faculty, recognizes the recipient’s potential for leadership in research and education. Campbell is a member of UVA Engineering Lab linkan interdisciplinary cyber-physical systems research center where he is one of many professors at the forefront of research focused on how humans can use connected systems to interact with their environment.

Consider a smart lighting system that turns lights on and off in a building based on where people move inside. A building can use up to 30,000 sensors. Fully exploiting the good things that connected devices could do means that devices could quickly reach trillions. There is no practical way to upgrade or replace them all with the same frequency that we use for personal devices.

Just imagine trying to keep the batteries in the sensors – one of the biggest maintenance headaches of all, and a Campbell has plenty of experience going back to his research days for his PhD. in Computer Science from the University of Michigan.

“Not to mention what do we do with all these old devices that worked reasonably well, but maybe just didn’t keep up with the times? Now those essentially become e-waste,” Campbell said, adding that unlike large computers and appliances, small electronics are difficult to recycle.

“What we need is something that can allow us to use devices that are already deployed and keep them useful decades into the future,” Campbell said. “But it’s difficult because the arc of technology doesn’t recede. We don’t tend to want things with fewer features, or that are less secure or offer less utility. We always want more, more, more.

Campbell and his team, including Ph.D. students Nurani Saoda and Nabeel Nasir, are designing a new class of sensors and what they call the “ecosystem” in which the sensors will operate. By “ecosystem,” Campbell means software that the team develops to run on existing commercial hardware platforms, such as the Raspberry Pi. The goal is for the sensors to be able to adapt to whatever the future holds for us.

The first obstacle is to power the sensors without wires or batteries and without knowing what their environment will be like in 20 years.

Researchers already know how to design sensors to draw sufficient energy from nearby sources, such as sunlight, interior lighting or vibration, to operate. But these sources may not always be there as building occupants and uses change.

“Part of this project is a new energy harvesting power supply design that can encapsulate this complexity, so it can handle what happens when characteristics and power needs change,” said Nurani, who directs the power supply works. “This frees up the processor at the application level to focus on the sensing task, which simplifies development and creates more adaptive devices.”

“The status quo today is you just updated everything,” Campbell said. “You replace all the code that’s running on your devices, and if something goes wrong, maybe there’s a way to roll back to the old version, or if there’s a bug, I hope that you can update it again.”

The older the hardware, the scarier the updates become – until operators have to ignore any new security issues and are stuck with how the device works today.

To solve the problem, Campbell’s team is working on new software architectures to make the software configuration of devices modular, essentially isolating software components from each other. Components can then be upgraded individually, without reprogramming the entire device.

This software modularity is one of the methods developed from the project that Campbell will incorporate into undergraduate and graduate courses for the educational portion of the CAREER award. It is also looking for graduate students from historically underrepresented backgrounds in engineering and first-year students to collaborate on the project.

The aim is to train engineers proficient in fundamental techniques that understand the intersection of the Internet of Things and its cross-cutting applications, as well as the ethical implications for all stakeholders.

The team will address another limitation to the functional lifespan of small connected devices: “computer obsolescence”. As hardware improvements make it possible to achieve more performance and to run increasingly complex software using the same amount of power, the computing powers of older devices decrease relative to the new requirements.

Campbell looked at how wireless communication technology prioritizes backwards compatibility. For example, a modern Bluetooth 5 device can still be paired with a Bluetooth device from the mid-2000s.

“This suggests that while today’s microcontrollers may not be enough for tomorrow’s software, today’s devices will be able to communicate for decades to come,” Campbell wrote in his CAREER proposal. Awards.

The idea led to the idea of ​​offloading tasks that were too complex for an aging sensor to a nearby gateway hub that could do the job. Because there will be far fewer gateways – about five for every 300 sensors – it is possible to upgrade or replace them as technology evolves.

Nasir develops the gateway software to support the sensors.

“In effect, it’s as if we had deployed the latest hardware to the devices themselves, but without having to replace a large number of sensors,” Nasir said.

It is important to Campbell that future application developers who want to add new functions to sensors should never think or even be aware of the transaction between the sensors and the gateway. He wants to remove the barriers that prevent decision-makers in all sectors of society from maximizing the benefits of the Internet of Things.

“I think these devices don’t go the way of smartphones where we replace them all the time, that’s important,” Campbell said. “But it is also important to enable better operated equipment, better managed buildings and more efficient infrastructure.

“We need to find ways to not only have the individual technology pieces, components or devices themselves, but also the larger ecosystem that is really scalable,” he said. “That’s what led to this idea of ​​reusable devices.”

Nostalgic gadgets: devices that take us back in time